the birth of my maisie

On 23rd July, the morning before my due date, I woke early with more mild contractions. It had been just over four years since Lucy’s wonderful birth at Frankston Hospital, and it had started exactly the same. Lots of pre-labour and braxton hicks in the weeks before, which I had found very frustrating last time. (You can read Lucy’s birth story here.) This time I did my best to ignore the cramps that came and went. I figured if they could be ignored, it wasn’t really labour.

Very early in the pregnancy I had decided to have my antenatal care through a lovely independent midwife, Louise from Community Midwifery Services. I didn’t like the experience of seeing a GP through Lucy’s pregnancy. Frankston Hospital offered free antenatal care through their midwife clinic, but I found their appointment times were always running waaaaay behind when I saw them through Oliver’s pregnancy.

I had known Louise for a couple of years through work contacts, so she already felt like a friend, but an independent midwife sounded too good to be true – one on one antenatal and postnatal care with the same team of midwives, in my own home! She would also support me through birth, which I had originally planned to be at Frankston Hospital. (Medicare covers a large portion of the cost of an independent midwife, you can read more here.)

During my 34 week antenatal appointment with Louise, I mentioned that I loved the idea of a home birth, and it was something I had been thinking about. I loved the idea of having whomever I wanted at the birth, including my children. I knew it was Hospital Policy to only have two support people with a birthing mother, and I wasn’t sure if they would allow my friend Mel in to take photographs when I already had Dan (my husband) and Louise with me. I loved the idea of being able to get into my own shower, and then my own bed after giving birth. I wanted the freedom to do what I wanted throughout labour, and then not be separated from my family afterwards.

I didn’t plan on having any more babies. If I were ever to have a home birth, it would have to be with this baby. I thought it was silly bringing it up so late in the pregnancy, and assumed it would be too late to change the plan. To my surprise Louise wasn’t at all fazed and just said, “So why don’t you have a home birth?”

I remember saying goodbye to Louise, then standing in my lounge room excitedly thinking ‘I’m going to have a home birth!’… then a few seconds later “Shit! I’m going to have a home birth?” As someone who is normally really organised I felt completely overwhelmed! The first thing I did was speak to Dan about it, who was really open to the idea. I then searched for all the info I could find! How many towels would we need? What happens with the placenta? Where would I get a birth pool?

I joined a homebirth Facebook group to link in with a home birthing community and started visualising my homebirth. I decided to invite two of my sisters to be at the birth. I didn’t feel that I needed them there for support, but I hoped that witnessing a beautiful natural birth would serve them well when it came time for them to birth a baby someday.

My step mum would also be at the birth as the carer for Ollie and Lucy. I trusted her completely; she would know if they were coping ok at the birth or if they needed to be removed.

So, I lay in bed, trying to sleep and ignore the mild contractions. After an hour, I sent Louise a text to let her know things might be starting. Another of her clients was also in labour, so the plan was she would send Helen, one of her team (which I’d met at the birth plan meeting) to see how I was doing.

There was no way I could sleep, I was getting excited! I had breakfast then a shower, and the contractions continued. They started coming closer together, and I got a little concerned this baby might come quickly. I let Louise know, and in no time at all Helen arrived. She checked baby’s position and heartbeat, which were all perfect. I continued to Labour throughout the morning. Two of my sisters, and step-mum arrived to look after the kids. Then, just like with Lucy’s birth, labour stopped! Louise arrived and I tried not to get frustrated, but I was so ready to have this baby! I wanted to know if it was a boy or girl, if it had dark hair or light, if it looked like Ollie or Lucy…

Everyone headed out of the house to give me some peace. I tried going for a walk, but ended up resting in bed with a heat pack. Louise and Helen returned and I explained that I had had random contractions, but wasn’t in established labour yet. They left but encouraged me to go to the acupuncture appointment I already had scheduled for 4.30pm.

At 3.30pm the regular contractions returned. Dan and I headed out to see Tyler at China Dragon for my acupuncture, and we were greeted with great excitement. He was so pleased I had come, and would use points to help labour become established. I had a couple of really strong contractions while on the table and was glad when we were back home. 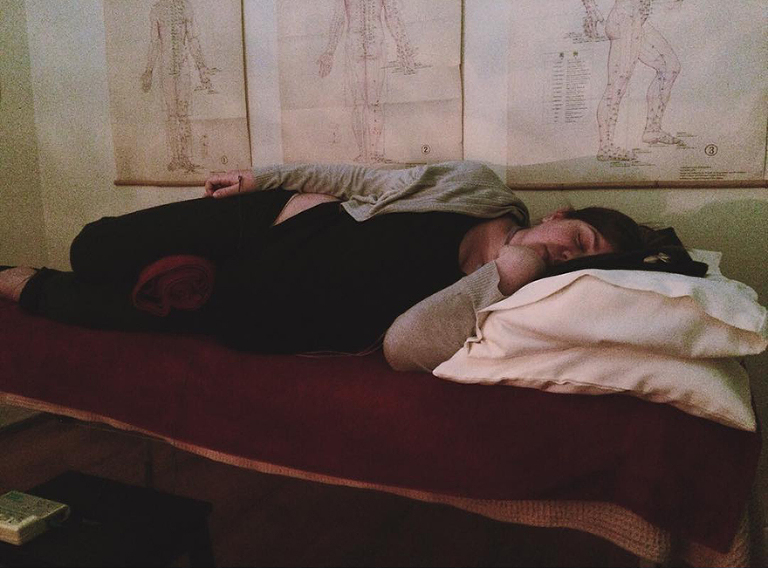 By 6pm I knew there was no way this would stop again, I had to really concentrate on breathing through each contraction and all I could think about was getting the birth pool set up so I could get in!

While Dan started filling the birth pool, I rested on an exercise ball, moaning through the contractions. My step mum, Bette, was getting Ollie and Lucy ready for bed. They were really interested in all that was going on. They each took turns rubbing my back and getting tissues when I got a little teary. Meg and Nicola (my sisters) timed my contractions and kept Mel (my photographer and friend) up to date so she knew when to come.

Louise and Helen made their way back and checked me again. We all knew that this baby was going to be another big one, but it wasn’t truly engaging in my pelvis as I seemed to have lots of fluid. Helen tried the Rebozo technique while I was standing, to encourage baby down, but then I hopped into the pool.

Labour became very intense, and seemed to go on forever with slow progress. I kept thinking that I must be getting near the end, but then another hour would go by and my baby still wasn’t here! I was coping ok, but felt disappointed that it was harder, and was taking longer than Lucy’s birth. I felt very aware of everything going on around me, and in between contractions was talking and laughing with all the beautiful people surrounding me.

After a few hours in the pool it was nearing midnight and my midwives suggested I get out for a while – perhaps movement and the gravity of standing would help things along? They checked my progress and I was about 8cms dilated, but baby’s head was still floating up high. After a lot of discussion, we agreed that breaking my waters would help baby descend and move things along. Louise ruptured the membrane while Helen calmly spoke in my ear, explaining what they were doing. Louise didn’t let the head (or cord) come down too quickly with the amniotic fluid gush, to avoid distressing baby. I got back in the pool, kneeling over the edge, and after a few more contractions I began pushing! Finally!! Just like last time, I was so glad the second stage had arrived. It felt good to push! I was very aware of my baby beginning to crown, and instinctively put my hand down to touch the head. I could feel my baby’s wrinkly hairy head! My midwives encouraged me to feel my baby, and apply gentle pressure to stop the head from coming too quickly and tearing my perineum. The head was delivered and I could hear my sisters crying and saying they could see the baby’s face. I gave one more huge push and at 12.28am I caught our baby between my knees and pulled her up to my chest, giving a huge sigh of relief.

After a moment, I discovered our baby was another girl! I had been hoping for a sister for Lucy and felt so incredibly blessed. Dan and Nicola woke the kids and brought them out to meet their baby sister. We announced her name, Maisie Anne. I got out of the pool to deliver the placenta, and was surprised when Maisie started rooting around looking for the breast at only 15 minutes old. I helped her find my breast, she latched on and started suckling straight away. My midwives sutured up a small tear and after a long cuddle and feed, we weighed Maisie to discover she was indeed a very big bubba. She weighed 4.98kgs/10 pounds and 15 ounces and was 55cms long! Dan had a skin to skin cuddle while I got cleaned up and into my pyjamas.

I was exhausted and so relieved it was over, but I was in a blissful high. Maisie’s homebirth was exactly what I hoped for. I felt safe and supported throughout the whole experience and felt closer than ever to my family.

I hope you enjoy seeing some photos taken by my friend, Mel.